In a video performance lasting for 120 minutes the author with blinded eyes and heavy luggage staggers in front of a big projection following a rail. She is guided by a strict, ordering and violet male voice, which wants to make her get out of the screen, of the visual field and metaphorically out of public life. The movement on the tracks occasionally turns, the train goes backwards in its own path. The movement of the train is edited, usually with the transition from the darkness.

NoHomeVideos© are 14 video performances in which the author is dealing with the experience of being manipulated by the agents of power and control. Performances stress the power of individual's will and intelligence in a fight and resistance against pressure and abuse.

Lights & Pipes
Listening to the Globe-Be... 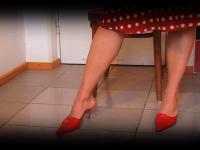 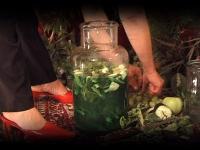 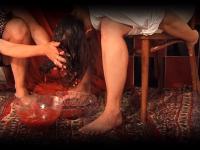 Duba Sambolec - Collectors #3 (00:30:55)
Production: Duba Sambolec, 2002
Video deals with the dynamics in a personal service sector through a series of scenes displaying body care in a satirical manner. Scenes are set in doubles. The woman offering the service is preparing the cosmetic specimens and in the next scene she uses...

Duba Sambolec - Tour de Place (00:12:06)
Production: Duba Sambolec, 2001
Video is a performance carried out by one of the artists in front of and the other behind the camera. Pernilla Edholm guides Duba Sambolec and consequentially the viewer around an empty space and together they explore it in an ironic manner. Edholm establ...
Duba Sambolec - Collectors #2 (00:15:15)
Production: Duba Sambolec, 2001
Video work is a research in the field of personal memories, their collected fragments, of the articulation of holes in the memory and missing evidence. The whispering of the author follows the whole line of recordings in a nondramatic, mystical and calm...

Duba Sambolec - Listening to the Globe-Beat (00:36:25)
Production: Duba Sambolec, 2000
Video performance documents the procedure of planting. Static camera records a scene in the middle of the space, where there is a pile of dirt with eight flower pots and postcards laying around. The author starts to fill in the pots with dirt, then she ta...