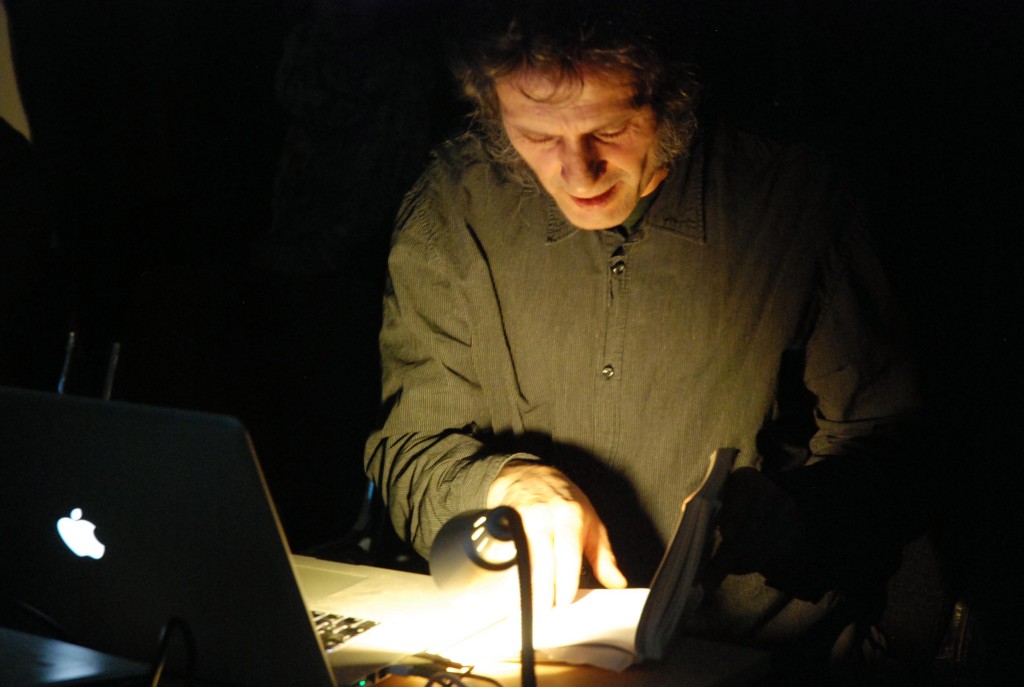 Neven Korda had read a few passages from An Anthropology of Images while he was screening segments from video documentary The Old and the New which he had directed in co-authorship with Zemira Alajbegović. This is a body of texts by Hans Belting who is one of the rare art historians examining the image and incorporated it into the discourse of the media. We are able to notice a certain struggle for a monopoly over the definition of how to understand images. This is much similar to the writing about history in general. Hans Belting understands the image as a symbolic unit. However, to make the images visible and to communicate them, we have to work with the medium. Juxtaposition of the text and scenes from the video has offered a reflection on how the world can be seen through the images. However, making images means to embody them (in a medium). Reference: Hans Belting, An Antropology of Images, 2011 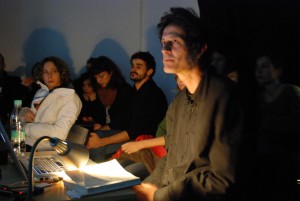 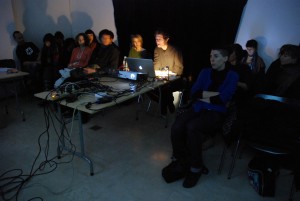 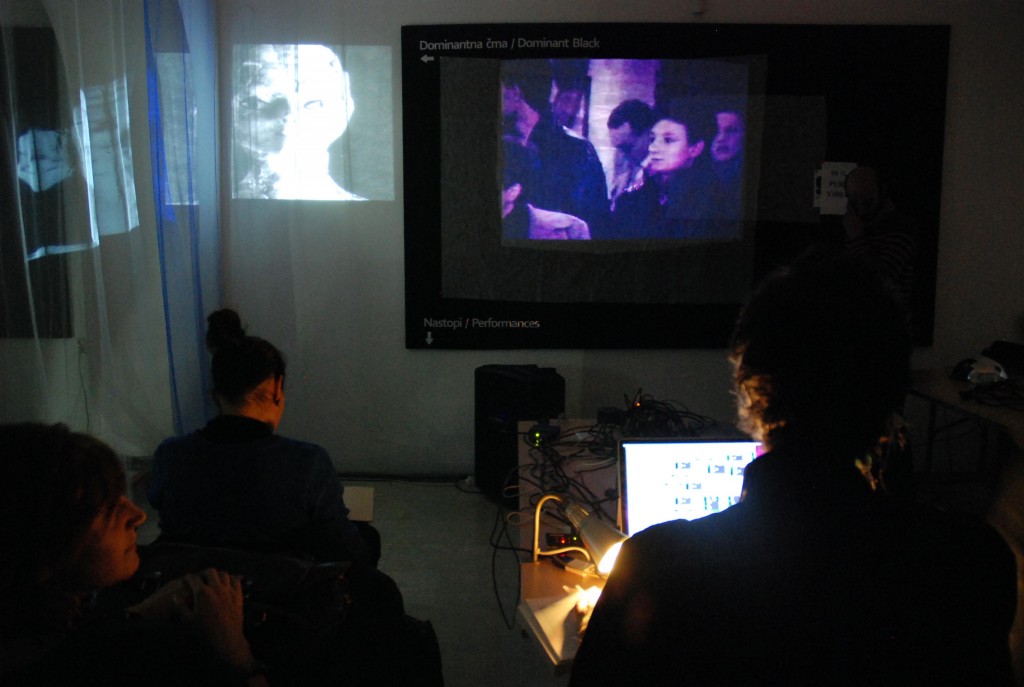 Public reading of an interview with Neven Korda conducted by Miha Colnerja was a radio performance. Interview entitled In Search of Beauty, which was carried out in February 2012 for Art Words Magazine, analyses and defines the artistic practice of a devoted video artist. The discussion was published in the full printed version in Winter Issue of the Art Words Magazine in December, 2012. In the gallery, the original actors re-enacted their conversation, with the addition of background sounds from Korda’s video installations Dominant Black and a series of five performances at Vžigalica Gallery. The interview was directly aired on the Radio Student in the context of the Open (Artistic-Theoretic) Research Platform R A D A R. 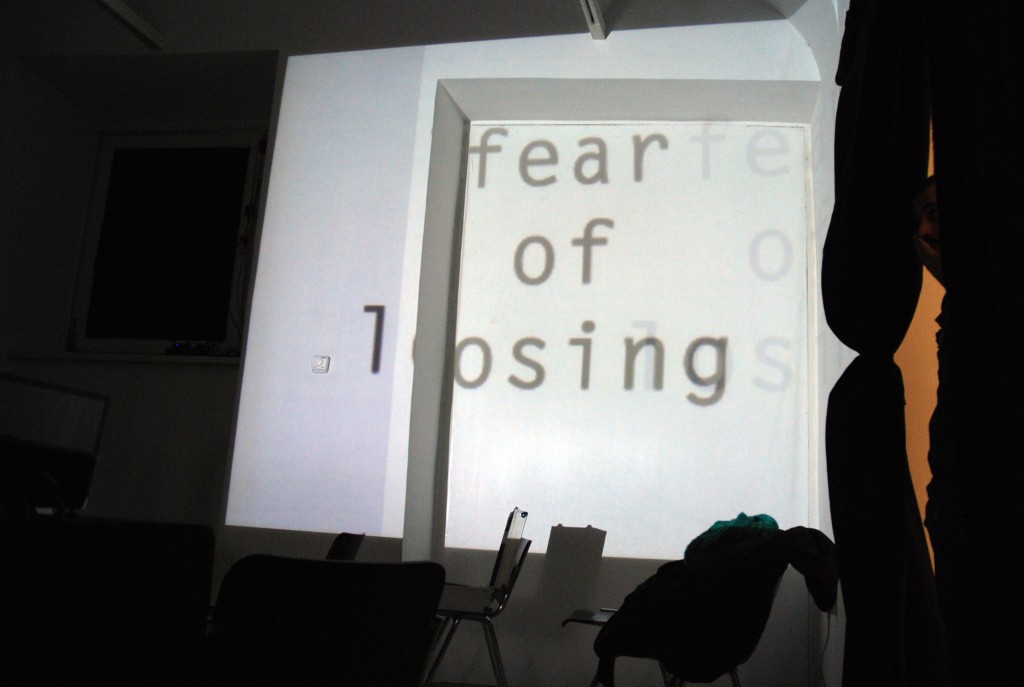 Neven Korda introduced his agitation performance with a statement: “A work of art is the object produced by the artist.” This statement was made in order to emphasise the interest, which is the precursor of all other elements in the performance. Primarily, he is interested in the emergence of beauty and aesthetic elements that trigger mental images; emotional and physical involvement in the entire action. The space was saturated with video projectors pointed at all directions. The artist was generating video images by the usage of colour and typographical/word elements. All along he was reciting textual fragments and slogans followed by speech-modulated sounds. The repetition of the words caused the loss of the meaning and they were becoming merely an aesthetic quality. Video and sound were connected with generative programs Isodora and PureData. First of all, the artist was interested in visual effects, namely what he calls the beauty caused by the rules of the operation of technical medium, thus he adopts it in order to cause the inception of beauty. In his words, beauty is the effect that ensures the arts to exist as an independent social field, and prevents art to merge with other fields such as ideology, politics or technology. At the same time, the artist uses critical elements and statements in order to construct a bridge between the field of beauty and ideology. NW from SE is therefore also a criticism of geopolitical relationships. The artist calls for a view, which does not predict for fixed or landowning geopolitical relationships, but rather flexible viewpoints. This would cause a realisation that any position can be specified in terms of something North West of South East. Performance also uses an entirely personal story, as an allusion of the view through the artist’s studio window at Metelkova in the direction of the North East. 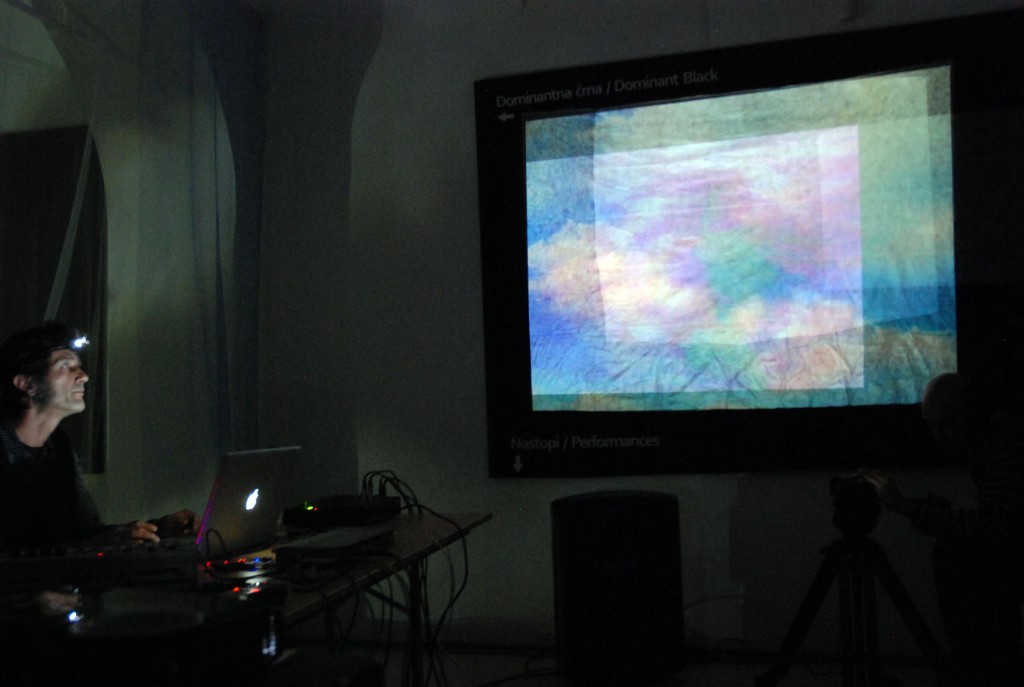 Lecture Performance, Vžigalica Gallery, Ljubljana, 16. november 2012
Neven Korda has presented the technical parameters which define the video as a medium. The specifics of the analogue image are essential for understanding of the theory of video, which is determined, according to the artist, by the sensor, the signal and the electronic display.