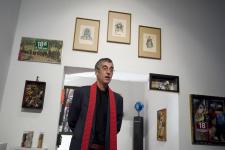 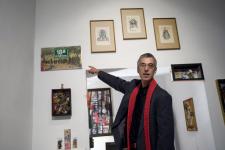 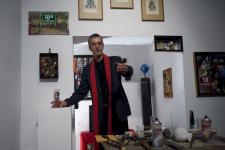 Born in 1956 in Ljubljana. Graduated from the Academy of Fine Arts in Ljubljana, where he completed postgraduate studies in sculpture (M.A. in Fine Arts) in 1988. He was active in various art groups: Ana Monro Theatre (1981–1991), R IRWIN S group (1983–1985), Zlati kastrioti music & multimedia group (2000–2005). His artistic practice is characterized by a prominent interdisciplinary approach and a distinct taste for poli-media. He is using methods, strategies and procedures deriving from various artistic practices as well as the tools and languages of several media and means of expression, thus establishing a Gesamtkunst work. He is exploring and linking performance, sound, video and installations, in addition to his sculptures. In a direct or media situations he is prone to establish a symbolical space of communication in which the spectator plays an active role of decipherer of meanings, a connector and trigger of events. The levels of significance of this entire artistic practice evoke multi-facetted references and associations that are connected to preceding attainments - chiefly those of (historical) Avant-gardes as well as the individuals that stubbornly persisted in their own utopian projects. The artist brings together the old and the new - something we might call the past and the present and even the potential future. If our consciousness is the result of interactions between the present and the past, then Kovačič's artefacts tell us that our future is also an unmistakable actor in this world of fragmentary perception and crumbling relations. The past memories might fill in our holes whereas the future expectations might make our lives more bearable. 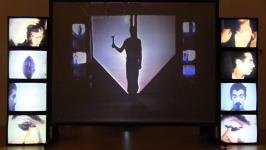 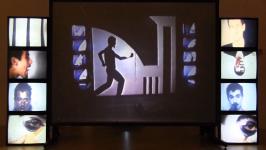 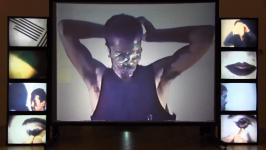 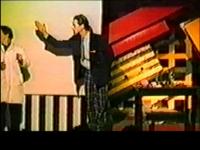 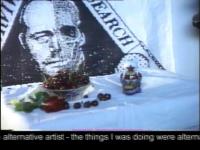 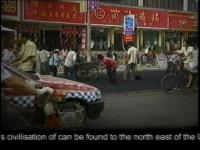 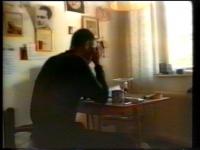 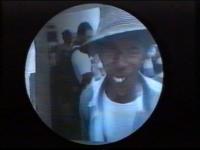 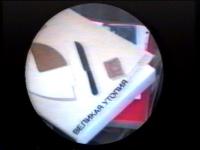 Marko A. Kovačič - Živel 1. maj - Praznik dela / May Day Forever (00:01:20)
Production: 2000
Short one-minute video showing clippings from newspaper articles about the celebration of May 1th, followed by sections and close-ups of certain motifs and communist symbols. 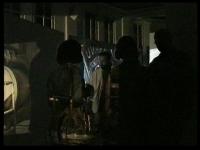 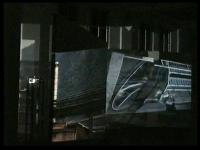 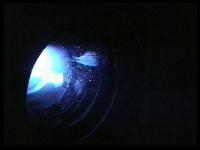 Marko A. Kovačič - The Lost Horizon (4:47)
Production: 1997
Documentary footage of The Lost Horizon, the artist's video installation at Kapelica Gallery in Ljubljana in 1997.
Marko A. Kovačič - Katastropolis (00:01:04)
Production: M. A. Kovačič, 1997
One-minute long overview of the set of project Katastropolis, composed of different actions and art works in different media. It is one of the basic sets for the authors video Forth into the past.
Marko A. Kovačič - Naprej v preteklost / Forth Into the Past (0:09:30)
Production: Forum Ljubljana, VPK, 1995
The video deals with our understanding of the distant future, presented through a concrete example of the 23rd century archaeology. A narration of a professor archaeologist leads us through the story as he guides his student through one of the main archae...
Marko A. Kovačič - Naprej v preteklost (razstava) / Forth Into the Past (exhibition) (00:05:38)
Production: 1994
Documentation of the exhibition in Škuc Gallery, Ljubljana, 1994
Marko A. Kovačič - I've Seen That... Like It Is (0:06:40)
Production: V.S. Video & Strip Core / Forum Ljubljana, 1993
A music video for a song - collage I've seen that … Like it is by a music group 2227 from Ljubljana blends shots of the group's performance with projections of graffiti by Strip Core group. Usage of lights and postproduction create chaotic and expressiv...
Marko A. Kovačič - No More Heroes Any More (0:18:15)
Production: V.S. VIDEO/Forum Ljubljana, 1992
Video deals with the theme of war in a parodic and grotesque manner. With Chroma key procedure the two main protagonists or shall we say antagonists - evil and conniving political leaders are set inside a TV studio, where so called Royal game takes place....
Marko A. Kovačič - Requiem M (00:04:02)
Production: Studio Brut, 1990
Video documents a performance entitled Requiem, which happened as a part of an exhibition Izkušnja predmeta (Experience of the Object)in Modern gallery in Ljubljana in 1989. The artist conducted the performance on his 33rd birthday. Coated with whi...
Marko A. Kovačič - Sarcophagus,The Eye (00:02:49)
Production: Studio Brut, 1990
Black and white recording documents two space installations entitled Sarcophagus and The Eye, accompanied by opera music. The pieces were part of an exhibition Experience of the Object in Museum of Modern Art Ljubljana in 1989.
Marko A. Kovačič - Prediction of Zeus (00:03:11)
Production: 1990
Black and white recording follows the process of the construction of an installation Prediction of Zeus in Sarajevo in 1989 to its final version. The monumental work combines elements of sculpture and video art for a sinister forecast of an apocalypse.
Marko A. Kovačič - Metelkova Network (00:37:14)
Production: Mreža za Metelkovo, 1990
Video documents a project "Mreža za Metelkovo", in which 200 partners gathered in 1990. Spatial needs of participating artists were presented in a programme, which came out in October 1990. All the corresponding institutions including the headquarters of...
Marko A. Kovačič - Programming the Gaze (00:07:41)
Production: Studio Brut, 1988
Video documents an exhibition Programming the Gaze in Škuc Gallery in 1988. Camera travels around the exhibition and captures space installations in close-ups and from unexpected perspectives. Shots of five different installations line up, the titl...
Marko A. Kovačič - The Sacrifice of Jupiter (00:01:11)
Production: 1987
Video is a simple collage of photographs from a performance The sacrifice of Jupiter, done with Marko Košnikl and Borut Cajnko. Video is followed by a lively music typical for silent films of the first half of the previous century.
Marko A. Kovačič - AIDA 87 (00:03:22)
Production: M.K., 1987
Video documents the author's installation with close-ups and details. Video is partly framed with a coloured mask. The author deals with sculptures theoretically as well through quotes featured at the end of the video.
Marko A. Kovačič - American Dream (00:06:43)
Production: Brut film, 1986
The hero first appears in real surroundings (the documentary effect), but in the next moment he finds himself in front of a rich fine-art scenery. The chroma-key effect is used to manifest some other world (the illusion of dreams). The scenery, however, d...
Marko A. Kovačič - Mirror Knows the Secret (00:02:34)
Production: 1986
The video is based on the performance of the same title. The metamorphosis of image is enabled by electronic technology. A step further from the chroma-key procedure of inserting of the front plane of the image into some other background, which invests th...
Marko A. Kovačič - Symposium for Sculpture Zreče 85 (00:01:32)
Production: 1985
Video is a document of an exhibition of two of authors sculptures made as a part of symposium by Forma viva community in Zreče. Totals and details of the statues are framed with a coloured mask. 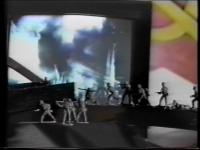 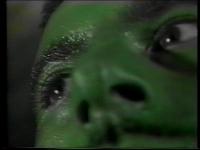 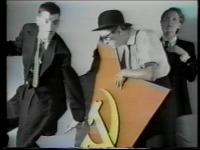 Marko A. Kovačič - Song of Flesh and Image Was Made Body (00:15:56)
Production: ŠKUC - Forum / koprodukcija Marijan Osole - Max, 1985
The story of the narrative is based on genre crime fiction. The images are filled with citations from the history of art and cinema (Man Ray, S. Eisenstein) and are further stratified and multiplied. The dynamics of the image fraught with a typical cinema...
Marko A. Kovačič - Sculptures 82-84 (00:01:47)
Production: 1984
Video documentation visually notes the author's sculpture work made in the years between 1982 and 1984.
Marko A. Kovačič - Back to the USA (00:04:37)
Production: 1984
Video je nastal v okviru razstave Back to the USA skupine R IRWIN S (katere član je bil takrat Kovačič) v Galeriji ŠKUC. Poleg dokumentarnih posnetkov z razstave in spremljajočih dogodkov, so bili kot performans uprizorjeni prizori iz slik na razstav... 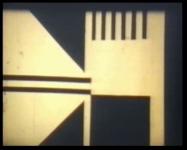 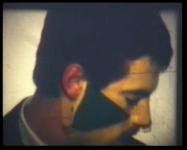 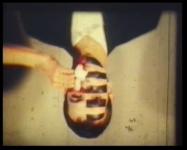 Marko A. Kovačič - Casus belli (film) (00:13:37)
Production: ŠKUC, 1983
A short film is composed by sequences that are constructed on the principle of montage and synchronised with sound that is played from a separate source (tape-recorder). The geometric constructions are alternated with images of the body (of the artist) th...
Marko A. Kovačič - Casus belli ( video performance) (00:04:54)
Production: 1983
Video documents performance in which the author combines elements of sculpture, space, geometry, physicality, action and music. With specific movement, contructivistically designed sets projected onto a screen and the present video installation the artist... 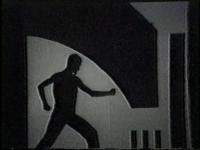 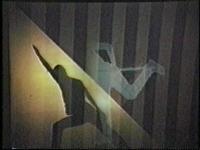 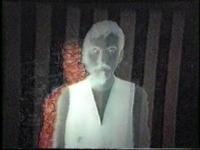