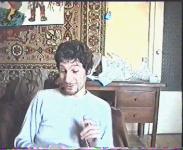 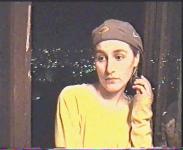 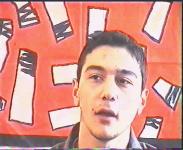 Abgarian Samve: "I perceive the cyberspace as a conception of presence, an actual situation, an informative area, and a concrete system of communication. It means that events of the past and the present are in a specific link, and this link may reflect from cyberspace to real life, to a spectator, to an artist, and to the man."

Abgarian Sona: "I think man can be happy, and imagine everything clearer, by sensual observation of reality. Thus, he lives easier, and begins to notice that seemingly stupid things are very pleasant."

Babelian Albert: "I wish to find in virtual reality felling of pain."

Bayadian Hrachia: "This is an interesting event, and I would even say it is rather promising. I decided to participate at this seminar because it was about digital technology, the cyberspace, and interaction between culture and new technologies, which has been my intellectual preoccupation for many years. Art is in the midst of technological revolution. I begun my presentation with recitation of Walter Benjamin's famous idea of "Creation of art by reproductive process of mechanical age". This idea, which has a history of 50 to 60 years, today is becoming actual. Benjamin spoke about photography and cinema, and today there is a much more wider spectrum of techniques: television, video art, computer graphics, electronic art, etc. All this helps us comprehend and understand the position of contemporary Armenian artist in relation with culture of technological transformation."

Chukaszian Garegin: "I consider that this CD raises the same questions that I tried to present in the seminar which had been organized at the conclusion of the exhibition. Art has become a collaborative human endeavor. This was the idea I tried to develop at the seminar. Collaboration and collaborative tendency are two main components of the essence of aesthetics of the 21st century. I salute this event, and the genesis of a new community, which has been set up and assembled, as a result. Congratulations."

Galstian Vahagn: "When I dance and my body is in independent motion, it raises a feeling of another world. Body is a concrete boundary among realities. I have had great difficulty crossing this border. There are frustrating moments when I cannot overcome the feeling of crossing over, when I am eager to be on the other side, or to move my body "there " ... Maybe it is impossible to do so, but I wish my body would become a kind of amorphous thing, which would submit to my will, to my ideas and senses."

Greg: "I consider the cyberspace as a state of super-reality. The ordinary reality and the virtual reality are interactive reflections. The material reality is a rough, filthy and rusty reflection of the virtual world. It is more archaic and rough. In principle, it is different from? multidimensional logic of idea."

Grigoryan Arman: "Artist... Do not believe Narek, the art of the 21-th century is bio-art. Hello."

Hovsepian Ara: "I consider virtual art and virtual reality awakening of dreams, which result from recycling of our problems. A space where we are free, and it can make possible to be completely happy. We are eager to move there.? We came to a situation in which an idea is paramount. The cyberspace is a proposition of anew kind of space for our interrelations. It is a new condition, a new philosophy (cyber philosophy) and a new way of thinking."

Kareian David: "I hate this reality and hide myself into the world of ideas... I would like to live there, but my body is very heavy and uncomplet, it digs into the ground and makes roots-despite of my will. I would like to be like a Nature, to be careless, as well as the animals and plants are... I wish I could! I ought to make a deal with the reality and to notice others and understand myself. I have become an artist."

Karoyan Nazareth: "Virtual reality is becoming a part of our life. A concentrated and technologically recreating one. We have high hopes in this respect. With the help of virtual technology we will not only expand diversity of our experiences, but will also find solutions for problems, which cannot be solved in the real space. Virtual reality will offer us possibility for realization of many ideas, but we shouldn't forget that it is a man-made space, which has certain limitations. We should not expect realization of every impossible dream. We can not create a new person, we can only redirect the direction one's view. Before the emergence of electronic era, our view had been directed outside, we were in spectators' position. Now we are literally submerged in this reality. Today our view is not only in the outside world, but also in our inner one. Human is unchangeable, and the superhuman is the reflection and projection of the human. If we try to change a human being physiologically, we would have some kind of "body-art". It canut it is not on the other side of the borders of our desires."

Katlamagia Varsenik: "New technologies for me are one of the means of expression. Expression of my ideas and myself. It depends on ones personality, and how one uses them. I consider that there is an interactive connection between an artist and his artwork, and very often the work by itself affects on the inner world of the artist."

Khachatrian Tigran: "I think that art should be very free and easy, like a spontaneous game. My work has been developed in that way. We were just trying the effects of a camera, how close and how far it can record, I liked it and decided to exhibit."

Matzakian Karine: "I am a legitimate model of humanity. I am a fighter. I am a terminator."

Pogosian Artak: "There is an old French saying: "I am here as an artist". If I could verbalize, I would not create art. I would write some texts, or do something more concrete.? I am fascinated by photography, and by expressing myself through it, maybe I am trying to answer the questions offered by cyberspace."

Romelian Vahan: "For me virtual art is a step forward. With my participation in this exhibition I have found new ways of expression, which can develop into very interesting transformations, cosmic relations between human ideas and the universe. These genuine ideas appear in works of art. By these virtual traces, we can understand where art goes, and how its ideas develop."

Sagatelian Samvel: "This man-made phenomenon is an effort for finding a space without limits. It offers possibility of overcoming all limitations. Kazimir Malevitch has shown us a space, an emptiness, which is on the other side of the good and the evil. Today, I think, we are approaching it, and this emptiness is infinity."

Sargsian Arshak: "What we see on the outside layer of this life I consider as reality. I take something from this reality and project it on my own world, trying to recreate a reality of my own, which can be something very strange and non-existing in the real life. I am trying to be conscious of these boundaries. For me it is enough to know that virtuality exists everywhere."

Simonian Haroutuin: "There is an opinion that in the contemporary art technical equipment play domineering role, and if there is no presence of computer or new technologies, art cannot be considered as contemporary. I do not agree. Contemporary art is a conceptual issue."