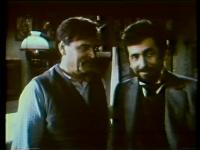 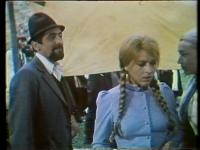 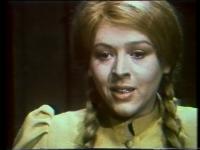 Zoran Srdić Janežič - Meta (00:25:00)
Production: Kulturno umetniško društvo Inštitut za likovne in multimedijske raziskave Modri krog Kranj, 2004
Video takes a Slovene film classic Blossoms in Autumn as its subject. Film ends tragically with the death of the protagonist Meta, who suffers a cardiac arrest, caused by extreme happyness. Author focuses on scenes, in which the fatal accident could happen even before the ending, by reediting the material. 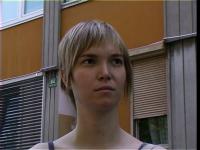 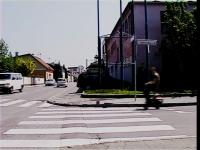 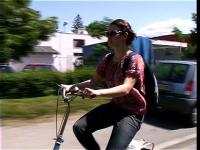 Zoran Srdić Janežič - Moja pot v šolo (00:32:20)
Production: Kulturno umetniško društvo Inštitut za likovne in multimedijske raziskave Modri krog Kranj, 2004
Video after a talk with individual students of the Academy of fine arts and design in Ljubljana, follows their way from home to school. The author approaches each of the paths with a different editing process, stressing the uniqueness of each of them. 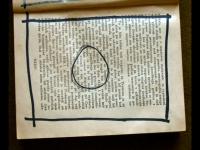 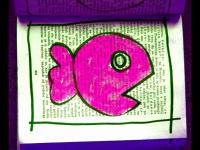 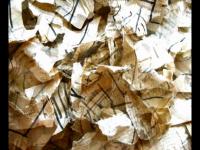 Zoran Srdić Janežič - Počečkane besede (00:05:15)
Production: Zavod za sodobne umetnosti in kulture GULAG, 2005
Video was made as a presentation of poems by Jana Putrle Srdić. Computer graphics, lines, drawings and monochrome colour surfaces are added to simple fast-forwarded shots of pages from a book of poems. Video is accompanied by a recitation of the poetry in subject and electronic music.
Tomaž Tomažin - Mr. Thornhill (0:02:07)
Production: 2005
Mr.Thornhill is the main character in the Alfred Hitchcock movie North by Northwest. In his video the artist has replaced the actor Cary Grant's head with my own and appear in the important sequence where he is being chased by a crop duster. The viewer is frightened for the character and feels himself to be both the artist and the character at the same time.
Zoran Srdić Janežič - Skrivno pismo moji ženi (00:21:00)
Production: Kulturno umetniško društvo Inštitut za likovne in multimedijske raziskave Modri krog Kranj, 2002
The secret letter is written on the magnetic tape of a video cassette. An unimportant video of several people typing a letter on a computer has the real letter hidden on its tape. The letter was erased in editing in order to get a somewhat acceptable quality of the recording. What is left is a distortion of the tape created by writing over the letters with a magnetic needle. 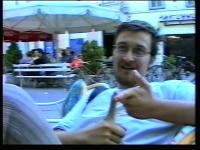 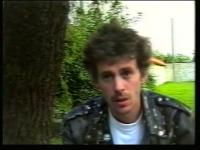 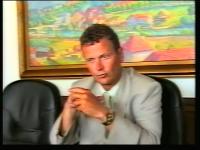 Zoran Srdić Janežič - Vidno - nevidno (02:19:28)
Production: Kulturno umetniško društvo Inštitut za likovne in multimedijske raziskave Modri krog Kranj, Klub študentov Kranj, 2001
Video deals with the cultural scene in the city of Kranj. Through a documentation of empty streets and conversations with young residents, city government and the creators of cultural contents the author establishes a critique of the cultural devastation of the city. 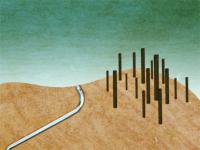 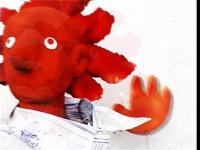 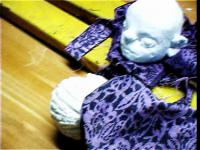 Zoran Srdić Janežič - Zgodba o tački (0:31:50)
Production: Kulturno umetniško društvo Inštitut za likovne in multimedijske raziskave Modri krog Kranj, 2005
Video is an animation of a same-name story by Matej Lavrenčič. The video connects animations by four authors.
Marko Kovačič - Symposium for Sculpture Zreče 85 (00:01:32)
Production: 1985
Video is a document of an exhibition of two of authors sculptures made as a part of symposium by Forma viva community in Zreče. Totals and details of the statues are framed with a coloured mask.
Marko Kovačič - AIDA 87 (00:03:22)
Production: M.K., 1987
Video documents the author's installation with close-ups and details. Video is partly framed with a coloured mask. The author deals with sculptures theoretically as well through quotes featured at the end of the video.
Marko Kovačič - Sculptures 82-84 (00:01:47)
Production: 1984
Video documentation visually notes the author's sculpture work made in the years between 1982 and 1984.
Marko Kovačič - Programming the Gaze (00:07:41)
Production: Studio Brut, 1988
Video documents an exhibition Programming the Gaze in Škuc Gallery in 1988. Camera travels around the exhibition and captures space installations in close-ups and from unexpected perspectives. Shots of five different installations line up, the title of each of them appears on the upper left corner of the screen. An important part of the exhibition introduced by a labyrinth construction, were sonic ambient (Egon March institute) and ambient lighting (Cian. kb).
Marko Kovačič - Prediction of Zeus (00:03:11)
Production: 1990
Black and white recording follows the process of the construction of an installation Prediction of Zeus in Sarajevo in 1989 to its final version. The monumental work combines elements of sculpture and video art for a sinister forecast of an apocalypse.
Marko Kovačič - Sarcophagus,The Eye (00:02:49)
Production: Studio Brut, 1990
Black and white recording documents two space installations entitled Sarcophagus and The Eye, accompanied by opera music. The pieces were part of an exhibition Experience of the Object in Museum of Modern Art Ljubljana in 1989.
Marko Kovačič - The Sacrifice of Jupiter (00:01:11)
Production: 1987
Video is a simple collage of photographs from a performance The sacrifice of Jupiter, done with Marko Košnikl and Borut Cajnko. Video is followed by a lively music typical for silent films of the first half of the previous century.
Marko Kovačič - American Dream (00:06:43)
Production: Brut film, 1986
The hero first appears in real surroundings (the documentary effect), but in the next moment he finds himself in front of a rich fine-art scenery. The chroma-key effect is used to manifest some other world (the illusion of dreams). The scenery, however, does not give the impression of immobility, but appears dynamic because of the changing surfaces; this is enhanced also by the constant motion of the hero ceaselessly changing between two roles, the pursuer and the pursued, and thus presenting the Hollywood-...
Marko Kovačič - Requiem M (00:04:02)
Production: Studio Brut, 1990
Video documents a performance entitled Requiem, which happened as a part of an exhibition Izkušnja predmeta (Experience of the Object)in Modern gallery in Ljubljana in 1989. The artist conducted the performance on his 33rd birthday. Coated with white wax make-up he immovably lies in a sarcophague for an hour and a half, as long as Mozart's Coronation Mass lasts. With the performance the author partly relived Jesus's experience and predicted the death of human kind. Focused and clear shots of the perf... 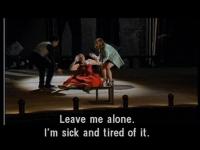 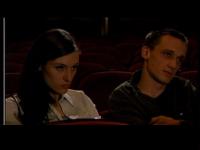 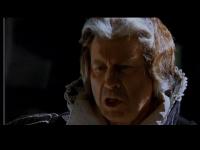 Miha Vipotnik - The Power of Destiny (50:47)
Production: KUP, RTV Slovenija, 2001
The work was made in 2001 and 2002 marking the centennial of Giuseppe Verdi's death. The power of destiny is an experimental and polemic story about the making of a film intertwined with music by the Italian giant of classical music Verdi and his contemporary Wagner, who demolished the until then accepted norms with his musical procedures. The film itself also provocatively questions high and popular art, opera and film creating a relationship, which through the questions about film language refers to Slove... 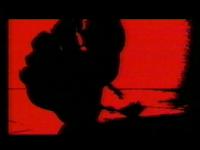 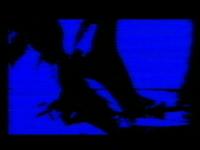 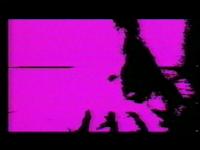 Boštjan Kavčič - Ples / Dance (0:03:44)
Production: 2001
A close up of feet dancing peculiarly to electronic music from Jean Michel Jarre's album Zoolook. Two different dichromatic filters are used and are altering one another. Playing with the medium, artist creates a stylized and abstract video using completely intimate and unimportant motif. 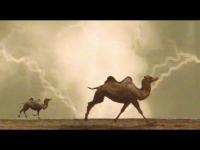 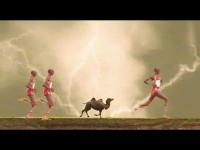 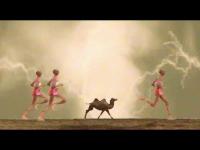 Vladimir Ristić - My Way (0:02:30)
Subtitle: Hommage to Eadweard Muybridge
Production: Veber Veber Production, 2003
The work is a music video for a song My way by Kodagain. Kodagain with the visual intervention of Vladimir Ristić creates a consistent video production, which is an integral part of the overall expression of the group. My way is a computer animation in constant movement. Figures of camels and athletes are rhythmically moving, emphasizing the music's steady rhythm. The whole minimalistic story of the video is set in front of stylized monotonous background, which reminds us of a dreary steppe. The video... 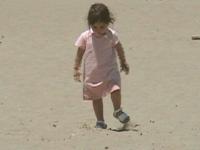 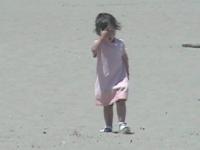 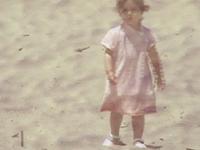