The video is a collage of numerous advertisements for cosmetic products showing the female body in seductive poses. Their rapid exchange is disrupted by digital glitches. The sound in the video consists of a quote from the text Foucault, Femininity and the Modernization of Patriarchal Power by Sandra Lee Bartky. The author of the video reads the part of the text listing cosmetic products that a woman is supposed to use to achieve the perfect look.

In the project (Without) I explore the representation of a woman, more precisely her body in television commercials promoting/selling products for women (makeup, hygiene products, personal care products, etc.). I have realised that women who appear in advertisements to correspond to the point to the description of the “perfect” appearance of the 21st century. However, even more tragic is that all shown one-dimensional side, all of them are in the role of goods, their personality is reduced to the object of sexual consumption. (Verša 1992). So, more or less, all women are portrayed as a fascinating object glued to a man’s look. Television commercials have become some kind of mild form of pornography. It does not matter what they are advertising, the main motto is “sex sells.”

I collected a lot of TV commercials and I have removed all the images of the advertised product and was left onlywith sequences of the female body. I took the sound away also. I was left with short, we could say, mild pornographic video. Then I overlap it with new sound of me reading the work of Sandra Lee Bartky, an article entitled Foucault, Femininity and the Modernization of the Patriarchal Power. The article deals with the planned monitoring of the female body. I chose a part where Bartky duhamfully lists the products that a woman needs to use to achieve the desired appearance. When watching a video, (I hope) we learn how the image of a woman is exploited. Her body is no longer truly hers, but belongs to us all. (Source: Lea Culetto) 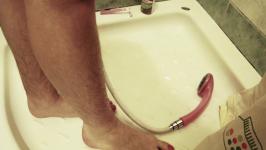 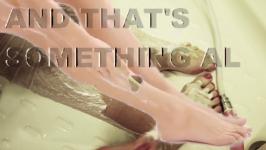 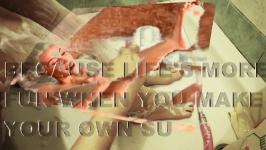