The video is part of the project entitled From 1.5 to COLLI 6.66’ created at the art residency between Izola and Bologna during the coronavirus epidemic. It was presented at the international exhibition Walking through identity in Bologna.
The video is an edited recording of a four-hour performance in which the artist with a 'limited' body goes on a pilgrimage route. The author attaches wooden sticks to her body with duct tape, which prevents her from walking. She can move only on her knees leaning on sticks. She has a recording mobile phone attached to her body. The video consists of footage from the phone and various shots from four people filming the performance from different distances. The video ends just before the end of the performance when the phone's batteries run out. The artist finishes the performance when she can no longer bear the pain.
COLLI 6.66’ is a continuation of the 1.5 performance where the artist extended and marked her space with wooden sticks. It was then that she first faced the pain and limitations caused by the rods attached to her body. At her residence in Bologna, she continued to explore new ways of communicating, feelings of (self)isolation, loneliness, and learning about pain and the feeling of sacrifice. She connected all this with the story of pilgrims who walked on their knees to the pilgrimage shrine of Santuario della Madonna di San Luca. From the city center to the shrine leads the Portico di San Luca, a 3.8 km long covered corridor with 666 arcades. The title of the video in translation means hill 6 hours and 66 minutes. Which is the time the artist has given herself in advance to walk the path on her knees. The number, however, also relates to the number of arcades considered to be the devil’s number. (Source: DIVA Station)

COLLI 6.66’ is the continuation of the work 1.5. I attached the 1.5 sticks to my arms, legs, and head, which at one point extended my reach and impeded my movement. With body extensions, I could no longer stand and use my limbs as usual. My body was instantly limited or even “mutilated”. The resulting image of a "mutilated" body, due to its particularity, approached the religious image of the tortured body of a pilgrim. (Source: artist) 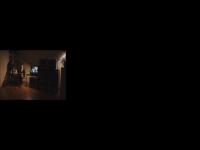 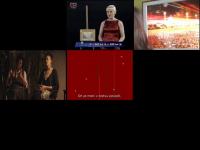 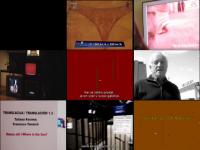 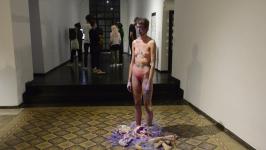 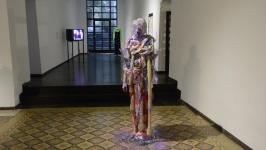 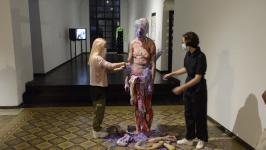 Tatiana Kocmur - Avatara (39:48)
Production: Lezbična četrt, 2020
Video documentation of Avatara performance at the opening of the Gender Slipslope. Lesbian Quarter Festival Exhibition at the ŠKUC gallery in 2020.The artist stands motionless in the gallery space. She is wrapped and hung with various textiles and... 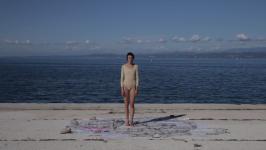 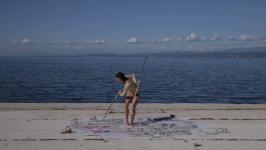 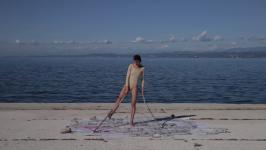 Tatiana Kocmur - Sunflower (12:34)
Production: Associazioni Ottovolante, Društvo Boja, 2020
The video is part of the project entitled From 1.5 to COLLI 6.66’ created at the art residency between Izola and Bologna during the coronavirus epidemic. It was presented at the international exhibition TRK at the Salsaverde Gallery. Sunflower is a... 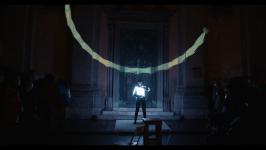 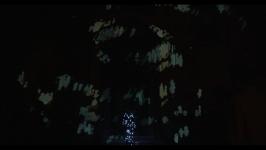 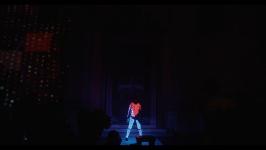 Tatiana Kocmur, Boštjan Čadež - Quintessence (24:06)
Production: Svetlobna gverila/Forum Ljubljana, 2020
Quintessence  is an audio-visual performance that combines the intermedia practice of Boštjan Čadež and the performative body of Tatiana Kocmur. The performer's body is covered with LED lights that respond to her movement. The movement of th... 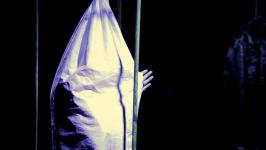 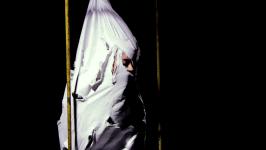 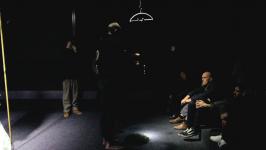