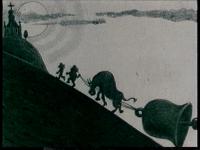 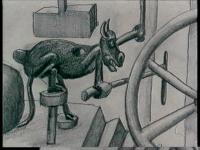 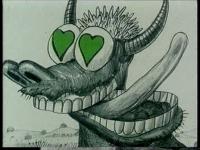 Socializing The Bull? Professor Rozina, a bald, world-famous geneticist, his less-renowned brother Bruno and his attractive assistant Marta have for several years been testing a wide range of chemical substances in the hope of discovering a unique mix that could stimulate hair growth. Professor Rozina intends to prove that evolution can be accelerated "here and now", starting with a single cell of his hair. The ninety-ninth experiment proves unsuccessful after Bruno has accidentally added some milk, previously meant for lunch, to a chemical substance and this results in an explosion. Professor Rozina is enraged by the fact that he has deprived of his lunch and he exiles Bruno form the laboratory. The brother decides to take revenge. At the same time, in the kingdom of a distant galaxy extending along the edge of the misty Andromeda constellation, the King Father catches his son smoking a cigar, which could be fatal for the kingdom. A single puff of tobacco smoke may lead to the anti-evolution of the kingdom's population. Fortunately, the boy inhales only a small amount of smoke, causing him to de-evolve only to the stage of a bull. The King Father punishes his son severely by sending him to the planet Earth, which is known to be covered with grass of the poorest quality in the entire galaxy. He will have to graze on it for seven years in order to come to his senses and learn to adapt to society. Accidentally, or perhaps not, the prince-bull finds himself in Professor Rozina's laboratory, only to become an object of his experiments. And at this point, the stories of evolution and anti-evolution fatally intertwine... (source: Animateka)