son:DA; Seymen, Erinc
No. 876
"Performance for a Poem 1"
Artist: son:DA; Seymen, Erinc
Title: Performance for a Poem 1
Subtitle: Istanbul
Duration: 00:16:28
+
MORE
Url: sonda.kibla.org/
ABSTRACT
The two channel video is a performance and site-specific installation realised in Istanbul and Maribor. In the second one it's clear that the stage where the performer acts and the public space are definitely separated. The low resolution image allows a digital manipulation of video and sound made of pixelization, distorsion, colour key glitch, streching of the image. Key role is given to the recitacion of a Turkish poem of the '30, a remarkable example of nationalist rethoric. The sound and the video image are interrelated, the distorsion of the sound and the particular noise cause a similar visual distorsion of the image, building a disturbing atmosphere where any communication seems impossible, rage and oppression are dominant. A technological modernity filters out through the interferences of the past, but it's not able to hide its contradictions and the weight of ideologies, intolerances, censorships still present in contemporary society.
TEXT
Performance for a Poem 1
We are witnessing a gravely evident transformation of everyday life by nationalism through
a wide range of methodologies. These vary from direct propaganda to the subtle agitations involved in current agendas like the European Union negotiation process, debates about minorities and secularism. It is a time when critical and intellectual divergence is antidemocratically censored, punished and sabotaged through emotional and physical sanctions by the state. This creates a situation where iconic figures such as the "flag girl", ali desitero, and many others are reproduced, or re-circulated to the benefit of the nationalist discourse. On the other hand, the rhetoric of a text that dates back more than half a century can accommodate today?s zeitgeist surprisingly well. In the context of the flow of ideology from "inside" to "outside" son:DA and Erinc Seymen will present a performance constructed around a poem(poems) written around 1930. The performance comprises an audiovisual manipulation and an on site installation that aims to open to discussion the sphere of influence of poetry as a tool of artistic expression and a method of ideological rhetoric. (Source http://sonda.kibla.org/seymen.html)
OTHER WORKS 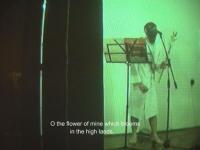 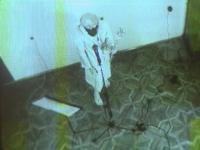 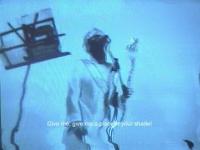