The DIVA News page refers to public presentations, exhibitions, screenings, publications in Slovenia and on the international scene, connected to participations of DIVA Station Video Archive and the video artists who had contributed their video artworks to the archive. We also introduce events organised by DIVA Station (SCCA-Ljubljana) in order to promote its content and usage.

To the second Back2Back – an event of artistic research of the DIVA archive – we invited artist, film author and curator Jake Yuzna (USA), who was at a research residency in the DIVA Station archive at SCCA-Ljubljana in 2020. In their selection of works, they followed the alternative culture in Slovenia and, especially for this program, they also created a new work in which they reflect on their attitude towards the alternative.
Link: Back2Back: Jake Yuzna – The Alternative Is Hard To See

In a series of four events at Kiblix festival we are preparing a series of online video projections on the computer and online art, perception of physicality in a virtual environment, and transmitted feelings. At the third event From the Archives of the DIVA Station: Online and Common we will present a documentaty film by Anja Medved and Patricija Maličev The Gathering – The Secret Side of Things We Share (2013, production: Kinoatelje, Zavod Kinoatelje, Zavod Kinokašča). The screening will be followed by a conversation between the curator Irena Borić, the director Anja Medved, and DIVA Station associate Vesna Bukovec. More

Accordionist and composer Bratko Bibič has been active since the early 1980s. He is present both at home and abroad, where he has performed independently and with various ensembles at hundreds of concerts in Europe, India, Canada and the USA. Among other things, he became famous in his homeland as the initiator of the music-film project Bridko Bebič traveling cinema. DIVA Station archive obtained the trilogy In the Family Garden, which was created in the period 1999-2005 as part of Bridko Bebič traveling cinema and is dedicated to the 100th anniversary of Slovenian film. In addition to the idea and original music, Bratko Bibič also edited the films with which he recycled and adapted archival film material and many neglected contributions of Slovenian and foreign filmmakers, thus making an important contribution to the history of local mentalities.
Link: http://www.e-arhiv.org/diva/BratkoBibic

In a series of four events at Kiblix festival we are preparing a series of online video projections on the computer and online art, perception of physicality in a virtual environment, and transmitted feelings. At the second event From the Archives of the DIVA Station: Digital Performances we will present manipulated video of a perfromance Performance for a Poem 2. Maribor (2006) by son:DA and Erinç Seymen, two performative video installations by Andrea Knezović Ode To Helplessness. The Inability To Breathe In 1.0 and Ode To Helplessness. The Inability To Breathe In 2.0 (2016) and public action by Sašo Sedlaček Veliki izklop/The Big Switch Off (2011). The screening will be followed by a conversation between the curator Irena Borić, the artists, and DIVA Station associate Vesna Bukovec. More

In a series of four events at Kiblix festival we are preparing a series of online video projections on the computer and online art, perception of physicality in a virtual environment, and transmitted feelings. At the first event From the Archives of the DIVA Station: Digital Surfaces we will present a computer video animation LADOMIR-ФАКТУРА: FIRST SURFACE-MICROLAB V1.0 (1994) by Marko Peljhan and several short works from the series of silent lectures The Most Beautiful Poems (2006) by Alenka Pirman.
The screening will be followed by a conversation between the curator Irena Borić, the artists, and DIVA Station associate Vesna Bukovec. More

We started with a new type of events entitled Back2Back where we invite domestic and international authors at different stages of their creative path to present their own production and establish a dialogue with works from the DIVA Station archive of their choice. The first invited artist was Mila Peršin, a young author and creator in various artistic fields. Due to epidemiological limitations, we prepared the event online. The recording is included in the DIVA Station archive, as well as her short film Auntie Milena.
Link: Back2Back: Mila Peršin

Tatiana Kocmur graduated at the Academy of Fine Arts and Design in Ljubljana in the field of painting in 2015. In 2020, she completed her postgraduate studies in painting at the same institution with her master's thesis Body Installation - Between Performance and Object. Since 2013, she has been exhibiting and performing at various venues in Slovenia, Skopje, Milan, Bologna and Berlin. Her practice moves between painting and living art, as well as exploring the reflection of production conditions for contemporary art.
Her works in the DIVA Station archive: http://www.e-arhiv.org/diva/TatianaKocmur

Urška Aplinc works as an artist and a curator in the field of contemporary art. She graduated from the Department of Sculpture at the Academy of Fine Art and Design in Ljubljana and finished the School for Curatorial Practices and Critical Writing – World of Art at SCCA Ljubljana. She is interested in boundaries of art and representation as well as conditions of artistic production with an emphasis on a self-reflective artistic process and its placement in the institution.
Her works in the DIVA Station archive: http://www.e-arhiv.org/diva/UrskaAplinc

Multimedia artist Agnes Momirski focuses on the posthuman subject and human experience in the technological environment. She creates in the fields of performance, music, installation, photography and film. The artist, who lives between Ljubljana and Rotterdam, presented herself to the Ljubljana audience in 2020 with the multimedia performances siXren (verbum medicinae) organized by the Šviarija MGLC and the Polymorphic ritual organized by Cirkulacija 2.
Her works in the DIVA Station archive: http://www.e-arhiv.org/diva/AgnesMomirski

During the autumn months during the epidemic, we presented the DIVA Station in two online workshops: Barbara Borčić as part of the 18th Luxury Film Festival (From SCCA and DIVE to Stories Not Yet Written; November 18, 2020), when we also watched some films and videos. In the workshop On Archives in Dialogue (15 December 2020), Barbara Borčić spoke about the historical context of the DIVA Station (How Archives Record and Write Stories), and Ida Hiršenfelder presented the Network Museum of the Museum of Contemporary Art Metelkova (Connecting Hidden Treasures of NGOs). 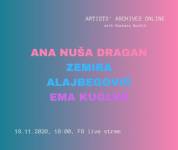 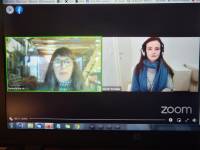 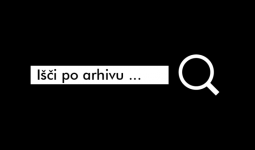