The DIVA News page refers to public presentations, exhibitions, screenings, publications in Slovenia and on the international scene, connected to participations of DIVA Station Video Archive and the video artists who had contributed their video artworks to the archive. We also introduce events organised by DIVA Station (SCCA-Ljubljana) in order to promote its content and usage. 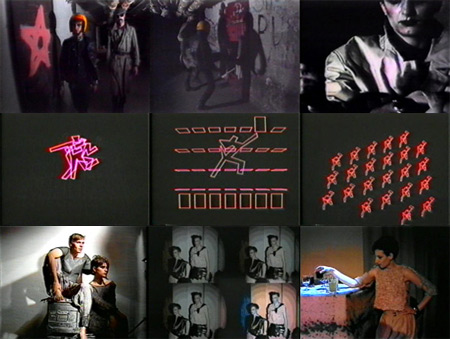 In her presentation, Nataša Skušek is going to focus on artistic works (videos, photography) touching upon feminist topics. We also cannot bypass her exhibition, entitled Mamica, dojilja, žena, negovalka (Mother, breastfeeder, wife, carer) at the Centre and Gallery P74 in 2006, in which she thematizes women’s incapability of fulfilling numerous social roles ascribed to them. Videoinstallation and artist talk March 7th, 2012 at 8 pm at SCCA Project Room, Metelkova 6, Ljubljana The videoinstallation will be on view also on March 8th between 10am and 5pm.

In the context of that exhibition, she screened the video Fliperautomat, which is a humorous way of the representation of four activities considered to be taken on by women in a taken-for-granted way. In this video, a woman is a ball in the pinball machine, jumping between the roles of a mother, wife, breastfeeder and carer. Her artistic work is strongly related to her own life – in it, she also warns against the disappearance of the female artist. In her work Ekstaza (Extasis), she exposes the myth of a wonderful motherhood and emphasizes the mother’s self-effacement. Whereas in the popular media breastfeeding is represented as a gentle act, her video shows the artist herself making painful facial expressions in the act of breastfeeding. Her message is that babies being breastfed are not gentle beings and that breastfeeding mothers often suffer from the inflammation of the breast tissue. Other works may be also watched in a sellection of her videos kept by Digital Video Archive DIVA Station at SCCA-Ljubljana. After the lecture, the audience will have an opportunity to have a quick look at her exhibition Pravi moški (A Real man) in Galerija Alkatraz in 2014. Video installation with two videos, Golica and Heri, set one opposite to the other, is a caricature of the contrast of male and female roles in the society. Golica is one of the songs belonging to the genre of national music; in the video, the artist dances to this song. In front of her is a female torso, moving her butt according to the male viewer’s whistling rhythm. The video Heri shows the process of making a braid out of a male ear. Its message is that women were supposed to be pleasing men, while men are the ones who were supposed to be nurtured and accepted the way they are. The exhibition in Galerija Alkatraz (Alkatraz Gallery) tackles socially prescribed outlook and behaviour of men, their feelings, and their perceptions of their female partners. With an example, it shows what a real man actually looks like, and how far (luckily) he is from the perfect image ascribed to him. The artist also holds a bitter-sweet surprise for the exhibition opening – fortune cookies with notes foreseeing, not the future, but the present, including chauvinistic sayings, being angrily collected by the artist for years.

Video Turn: Opening on Tuesday, 13th of November 2012 at 8 pm (13.–29. 11. 2012) Vžigalica Gallery, Trg franc. revolucije 7, Ljubljana. With the research and exhibition project Video Turn we wish to investigate and present the experimental (video, multi-disciplinary, new media) art practice and thereby also actualize the DIVA Station video archive, on the basis of which our research has initially begun. What is then the experimental and structural practice within a certain medium or within particular means of expression? What demonstrates creative and experimental use of technology?

What are the methods, techniques, processes and characteristics of artistic language at the turn from the analogue to the digital, from the magnetic tape to a computer disk, from the single channel to the multi-media and new-media projects? In the desire to reverse the dominant discourse on modern video and media artworks, that is favouring a theme, story or context, we focus on a specific media language and artistic expressions characterised by a different approach. We are developing the project together with the artists, that we have chosen on the basis of their longstanding work and activities in the field of experimental new media practices. In addition to research, interviews and texts we also prepared a series of public and closed lectures, screenings, workshops, performances and installations by Neven Korda, Marko Košnik and Miha Vipotnik from January till today. Active involvement of the researchers by means of writing and publishing texts and notes in the project's blog was a gesture to establish an equivalent responsibility for the formulation of statements; that researchers formulate in words and artists in the audiovisual field.

DIVA Station gradually updates the archival materials and gathers new attributions. Recently we've also started making an inventory of our own video production. Among other materials, this also encludes Video Essays edited and directed by our collaborator Nika Grabar who regularly documents DIVA's "off-line" projects, educational programmes and international seminars. In the essays she had presented the making of an archive from an entirely different point of view in the form of video essay with en exquisit sense for moving pictures and video narration.

Format Oblivion
Video Essay by Nika Grabar, Duration: 15 minutes, Production: SCCA-Ljubljana, 2012
This Video Essay is a direct result of seminar entitled How to Connect Contents of Audio Visual Archives? that encluded an exhibition, lectures and screenings at Vžigalica Gallery and a workshop at SCCA Project Room. The video has been shot in order to present how documentation and archiving of media materials are important for the understanding of contemporary artistic practices and media art. Video Essay deals predominantly with the question of an archive in the works of one of the pioneers of Croatian video art Dalibor Martinis. Other aspects of the long term preservation of video work is then further elaborated by Steven Kovats who conducted a lecture and presentation of video/jukebox archive Transitland and by head of techincal department at Netherlands Media Art Institute (NIMk), Amsterdam Wiel Seuskens, who presented a screening selection of NIMk collection and conducted a workshop on digitising and preservation of media artworks.

DIVA in Skuc Gallery
Video Essay by  Nika Grabar, Duration: 16 minutes, Production: SCCA-Ljubljana, 2009
DIVA Station was publicly launched in the gallery space in 2009 at Škuc Gallery in Ljubljana. The exhibition presentation had contained all the aspects of operation of a contemporary archive starting with acquisitions, restoration of materials, preparation of materials for promotion with video programmes and international networking. Collaborators who are in charge of DIVA - digital video archive and international guests answer to the questions of the functions of contemporary archives and their role in culture and society.

For 19th Anniversary of AKC Metelkova City a hosting curator at SCCA-Ljubljana Sixtine Rose Boyer prepared a video program about the alternative art scene, Metelkova and its forerunners. Sixtine Rose Boyer is currently working as a volunteer at the DIVA Station material and on-line archive of video art. Simultaneously, she is a postgraduate student of Triple Master Degree (Medias, Culture and Communication) at University of Nice Sophia Antipolis, Europa-Universität Vidarina of Frankfurt an der Oder and University St Kliment Ohridski of Sofia.The starting point of her thesis is the exploration of so-called Dark Culture (i.e. Gothic, New Dark and Cold Wave, Punk, Hard Core) in Slovenia and more specifically in Ljubljana from the beginning of the 80s till today. Predominantly, she is researching the role of groups and movements like FV Group, Borghesia, Laibach and AKC Metelkova City.

DIVA Station is a physical and web archive of video art, developed at SCCA since 2005 with the intent to research, document, present and archive video/media art. By now, it contains more then 1.000 items of different materials. The notable 1.000 entry in the archive is a video performance Wear VIII produced in 2010 by Tomaž Furlan. The artist has been working on his sculptural and video project in progress Wear, since 2006. He says that Wear is "some sort of a critical reflection on the use of interactive works or, as it were, sculpture, which have emerged as extended body applications in a constrained process".

We are also glad to note that in 2012 Tomaž Furlan was awarded OHO 2012 Award for young artist and is participating at the Manifesta 9 Biennial in Belgium.

- 108 artists and art collectives.
- 6.000 minutes or 100 hours of AV material for on-line viewing, and 15.000 minutes or 250 hours in the material archive.
- The most represented genre is artistic video.
- The most used keyword is body, followed by music and women.
- The most productive decade is from 2000 till 2009.
- 28 curated video programs Videospotting are based on DIVA Station archive.
- Since 2005 we have prepared 31 presentations and screenings (5 per year) in Slovenia and internationally.
- We organised 4 international seminars and 2 study exhibition projects focused on the issues of AV archiving in Ljubljana alone.
- At the seminars we hosted 35 experts, lecturers and artists from Slovenia and from international art milieu.
- DIVA station is a partner archive of GAMA - Gateway to Archives of Media Art international platform that connects similar European media art archives and enables them better visibility and wider accessibility.